If you were to ask me what my favorite part of the whole wedding process was, you would probably expect an answer like finding my dress or picking out our cake flavor, but no. It was my binder. My beautiful, beautiful binder. When I got this thing I was so proud of it. I kept it in my car so I could show it to anyone who made eye contact with me. I will treasure it forever.

I thought I would share my wedding organization tips with you here on the blog because they made those 4 months of planning SO much easier and a LOT more fun!

I found this great shop on Etsy that sold a printable wedding planner and it was awesome! Best $18.00 I spent on the whole wedding. It came with 50 printable pages! Some I didn’t even use but I appreciated its thoroughness. 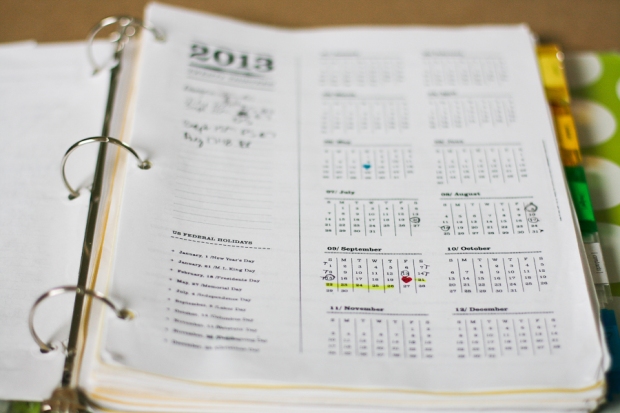 Tip #1: Keep a couple pages at the very front of your binder for random notes.

There would be times an idea for the dessert table would pop into my head but I didn’t want to put it into the main dessert page because I needed to run it by my mom and James first. It also became the home where random ideas and thoughts that didn’t fit in any category would reside.

Included in the wedding planner kit is a handful of different kinds of calendars. For example, in the photo above, it has the whole year on one page which was nice to see the four months we had to plan all at once in order to see when we should have the bigger events like the bridal shower, bachelorette party, and lingerie shower. I used another that was just 1 week on a page which came in handy for planning out the week before the wedding because there were so many little things to finish and errands to run. The point is, have different types of calendars that break down into smaller windows of time.

When I say “organized” I don’t mean just mean writing random things on a piece of paper and then scratching them off whenever they get done. The photo below shows my To-Do list and you can kind of get an idea of how it is organized. One section was for writing down the task, one for the X once it was complete, and another for notes. The notes section was nice because I was able to write the answers from the questions that I had on my To-Do list. For example, one thing I needed to figure out was whether we should hire a DJ or just put somebody in charge of an iPod. We decided to go with just an iPod (which we don’t regret at all!) so I wrote that in the notes section so I remembered. And I can’t even begin to describe to you how satisfying it was to see that column fill up with X’s. It really encouraged me that things were moving and stuff was getting done!

Tip #4: Write and organize it in a way that other people will be able understand it.

The reason I made sure  I was so thorough in my planning and writing things out was because I knew that on the day-of, I would not get to be at the venue to make sure everything was coming together as I envisioned. I knew I had to hand my binder over to my mom and event coordinator, Natalie (I might have had a mini heart attack at that moment).

This is mostly important if you are not the one paying for the wedding. For our situation, I would pay for things with my own money and then every few weeks my dad would reimburse me. This meant I had to keep track of every purchase I made that was wedding related. The photo below shows where I kept track of all that. I had another page that was for writing down the things I returned and how much they were so I could subtract that from my dad’s total and then another page for when my dad did pay me back and how much he did so that I could make sure everything zeroed out.

This was just so it was easy for me to find them in case I needed to get ahold of them instead of having to look up their business online every time. It also was a good resource for the event planner as well so she had quick access.

I just used Microsoft Word and made diagrams of what the ceremony and reception site would look like (i.e. where chairs and tables would be, desserts, sweetheart table, etc.) This came in handy so many times especially when explaining things to people who hadn’t actually visited the venue yet.

Tip #8: Have lots of printed schedules the day of the wedding.

As it got closer to the big day, I was able to make an extremely detailed schedule of everything that was happening from when the set-up team arrived to the barn, to when the sound guys were showing up, to communion, to the sparkler send-off. Then I made about 10 copies of it so everyone involved would know exactly what was going on. The last thing I wanted was for the people who were kind enough to help to be frustrated because there was a lack of communication and they didn’t know what was going on. I also made a smaller, more detailed schedule of just the ceremony for our officiant so he would know exactly what to say and when to say it.

Tip #9: Plan ahead to have most everything done at least a week before the wedding.

Early on I knew that I wanted to get as much done as I could the week before the wedding so that I could enjoy the week-of with family and friends who traveled here for it. Mentally, I said I had 2 weeks to get stuff done when it was actually 3 weeks before the wedding day.

Tip #10: If you want a short engagement, start planning before the ring is on your finger!

People thought I was crazy and weird for planning the wedding and booking the venue before James had ever proposed. But I knew that we weren’t going to be engaged for very long and that September was still wedding season so if I waited too long, all the good venues and rentals would be taken. It also got the ball rolling for when I was actually engaged and people would ask how they could help because I would already have things ready to get done. Overall, best decision. If you are hesitant to start planning because other people say you have to actually be engaged first, ignore it. Do what feels right to you!

Hope these tips helped! If you have any wedding organization tips that you figured out during your wedding, let me hear them!

Other posts about our wedding: | Our Wedding Details | Wedding Stationary |

A Trip Down Memory Lane